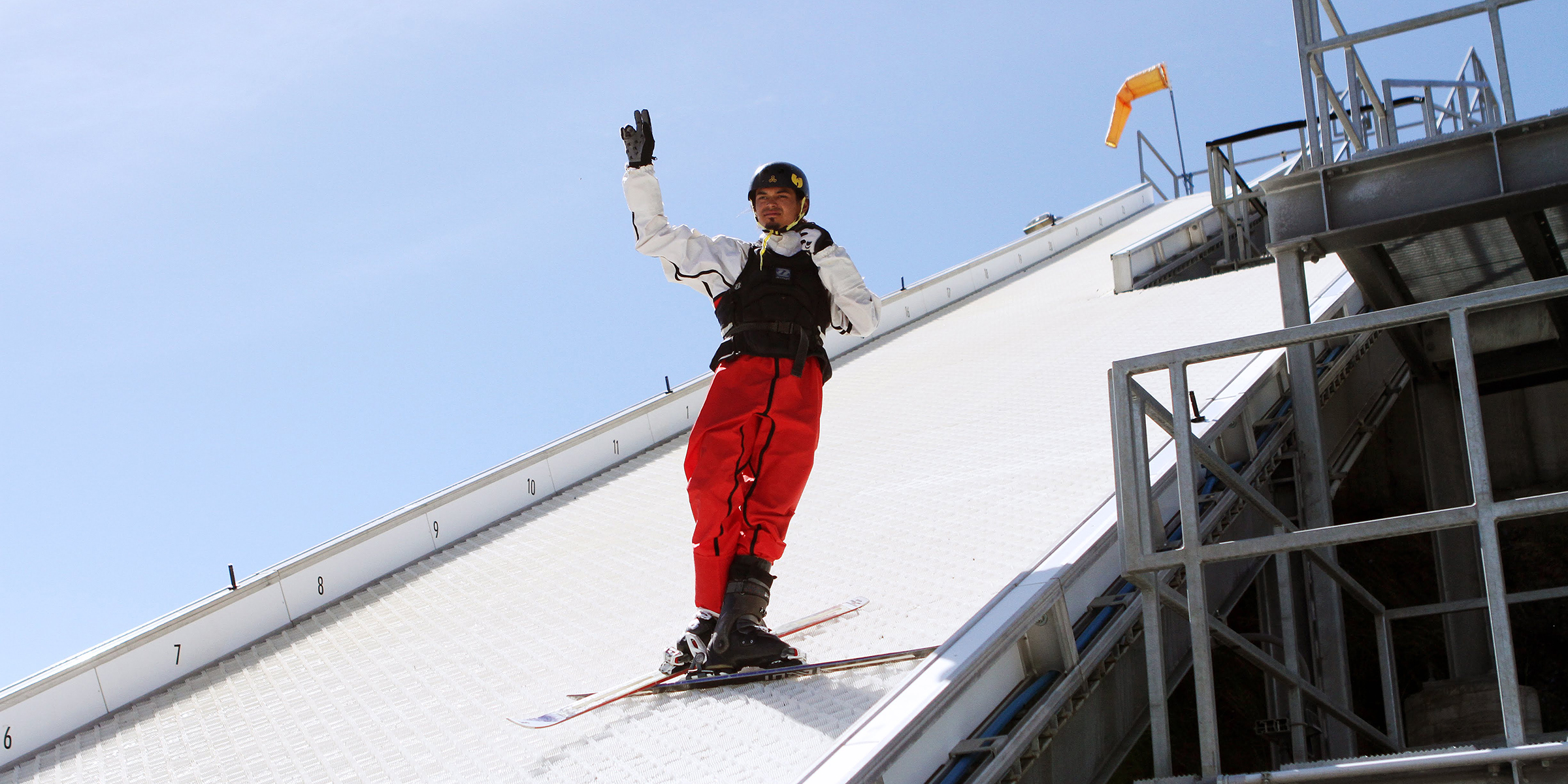 Repeatedly jumping off a 14-foot tall kicker that launches him nearly 50 feet in the air while performing quadruple twisting triple backflips into a pool all summer is not everyone’s idea of a good time. But for U.S. Ski Team aerialist Eric Loughran (Pelham, N.H.), it’s not only his passion, but it’s also his job. A 2018 Olympian and U.S. Ski Team member since 2013, Loughran, a consistent top-10 World Cup finisher, landed his first podium in March at Shimao Lotus Mountain in China. All of that hang time can get to your head, but Loughran found a way to decompress: fly fishing.

When not launching off of kickers, Loughran is on the river.

“I tried the whole [summer] mountain bike thing, and just kept finding ways to hurt myself. I got over that. But when I went out fishing, I got to explore and started to love the adrenaline rush of hunting the fish out. It was a lot easier on my body too. I can ramp all morning and then go out in the afternoon.”
– Eric Loughran, U.S. Freestyle Ski Team

Loughran knew how to fish before moving to Utah, but it was in Park City where he learned and fell in love with fly fishing. During the summer of 2014, his second summer training at the Utah Olympic Park (UOP), a friend introduced him to the fly rod. “At first I thought it was kind of ridiculous. But then I realized that if you do everything right, it can be one of the most effective ways to go out there and fish. Fish are always snacking on flies.” He hit the water hard that summer, both on the ramps and in the rivers. “It took me a while to figure everything out. I’d think I had it dialed, and then the next day I would go out and couldn't catch anything. So I really went after it that first year,” he said.

While spending time in the local fly shops Loughran was introduced to Cody Salrin and Matt Happe, fellow Park City freestyle family members and owners of Mayfly Guides, a Park City-based fly fishing guide company. Cody competed and coached aerials and Matt is married to Shannon Bahrke, Olympic silver and bronze medalist in moguls. The Mayfly Guides took Loughran under their wings and taught him how to guide people on the river. “It was cool because it was like this close freestyle fishing family. They taught me how to take people out. Cody would bring me out with clients to be an extra hand, and I would watch and learn how he did it,” Loughran added.

As Loughran’s guiding experience grew, word spread and he landed a job guiding with Trout Bum 2, another local Park City fly fishing outfitter. Now in his third summer guiding river trips, mainly on the Provo and Weber rivers, and he works with clients both through Trout Bum 2 and Mayfly Guides.

“My favorite part about guiding is teaching people who aren’t expecting much. They might be thinking maybe they won’t have that great of a day or make a fool of themselves and then they end up catching the most fish. It’s a sport that a 12-year-old boy could do the same as a 70-year-old man. I love getting people on fish that don’t really expect it, shocking people with a catch is pretty sweet,” Loughran said.

Loughran finds the process of organizing trips both a relaxing escape from aerials as well as good stress preparation for competition. Each trip is client-dependent, on their skill set, what experience they’re looking for and specific location so Loughran works closely with his clients to make sure he’s giving them a tailor-made experience. “It’s on me to know all of the water [in the area] no matter if the client wants to go to the Provo or the Weber, or ‘out in the wild’ in the Uintas," he said. "Even when I’m not working on a trip, I’m still technically working when I’m out fishing. I’m taking mental notes about what bugs are going on. I do a lot of scouting.”

Eventually, Loughran would like to guide internationally. As a member of the U.S. Aerials Team, he spends about a quarter of his year traveling on the World Cup circuit and has been known to bring his fly rod with him. “I started traveling with my fly rod on World Cup my first year on the tour. I fished all over the place, everyone thought I was crazy. I ended up catching fish in Switzerland and Finland.”

The aerials World Cup schedule takes the team to some far-flung locations like Belarus and China. And as navigating the cultural differences of those nations can be challenging, so can finding public water. Loughran doesn’t have a whole lot of free time to navigate the rules and regulations of places he visits in between jumping, but it’s something he continues to explore when returning to the same stops year after year. “Fishing in Belarus was something special," he said. "I’ve tried ice fishing there, which was really cold. I watched locals sitting on buckets with hand lines catching pike. I didn’t have as much success with my conventional gear.”

Although he may have looked odd traveling around the world with ski gear, a fly rod, skateboard and guitar in hand, Loughran has won over his family and teammates to his fishing world. “I get a lot of excitement watching people catch fish, especially for the first time," he said. "The thing with fly fishing is that anyone can do it. I taught my sister how to fish. Once I taught her it was a good little competition between us. I bring my teammates out all of the time too.”

• FAMILY • When @ashley_loughran moved out here she had asked me if there were anything I could go do with @kyle_leblanc24 ....That turned into a trip to the Fly Shop and endless hours of her annoyingly waiting for us to get off the river. Yesterday she asked me to go fishing, right after I got off a guide trip. She hardly gets time off and I was shocked thats how she wanted to spend the afternoon. She absolutely crushed it last night! Catching the most and the biggest trout! We might have another problem in the family... . . . #fishutah #utah #tightlines

Last summer Loughran was on the river almost seven days a week, as aerials fell to the back burner as he took a much-needed break after the 2018 Olympics and worked on funding his upcoming season. However, this summer he plans to refocus on aerials and spend three or four days on the river if it works out in his schedule. “I’m fortunate to travel all winter skiing and work all summer on the river. I plan to focus more on my training, especially how last season went," Loughran said. "If I give a little more attention towards aerials I can make some things happen.” Once Eric Loughran learned aerials would allow him to do as many inverted back flips on skis as he wanted, he was sold. He's seen success with consistent results on the World Cup tour, is a World Championships bronze medalist (Mixed Team Aerials, 2021) and is a two-time Olympian.